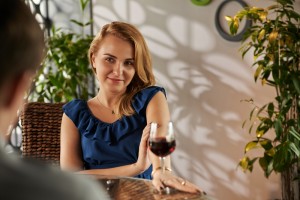 And The Sense of Compatibility

The First Dates Channel 4 show which opens its restaurant doors to love hungry singles is now in its fifth series of finding its diners love through first dates.  The matchmaking programme can even add a wedding proposal to its bow, albeit a whirlwind romance, nonetheless another success.  The happy couple met a mere three months earlier at the First Dates restaurant and have been inseparable ever since even moving in together just three weeks after they met.  During a First Dates Christmas Special hosted to reunite all its successful couples a nervous Scott got down on one knee and asked a shocked Victoria to marry him with a no expense spared Haribo ring to mark the occasion.  She now sports a diamond engagement ring and they have set a date to marry in the autumn of next year.

During an interview on the show Scott said he would not have picked Victoria if she’d been on paper but he’s now so glad they went on that first date as it has changed his life.  Scott’s comment about not picking Victoria on paper is quite important and I will explain why so later on in this article.

Intrigued, as I had not watched the programme previously I decided to watch it on Friday 29 January 2016 and it didn’t surprise me as a professional matchmaker that three out of the five couples who took part in the show liked one another enough to want to meet for a second date.  That’s a 60% success rate which is very good.  So why is First Dates so successful?  Well put simply the people who take part in First Dates meet their dates face to face, in a safe environment, not knowing anything about them whatsoever so they have no preconceived ideas or high expectations which can sometimes result from speaking on the telephone prior to meeting.

Prior to the show the First Dates team sift through the applications and put their matchmaking skills to use by selecting the best possible matches who are then invited to take part in the show.  During this date, which in some respects is a chance encounter, the couples hit it off or they don’t.  Fred Sirieix, the Maitre D, is always on hand to lend a supportive word or comforting smile to those who feel nervous or shy.  It really is a heart-warming show to which I am now addicted.

However, the point of this article is to explain why just meeting someone your matchmaker recommends could be right for you and if you do why it can be so successful.

Here at South Downs Introductions we do use profiles which contain photographs.  The profiles tell our clients a little about the match we have selected for them.  On some occasions clients will view a profile and assume they won’t be compatible with the match we have selected because the match doesn’t tick every item on their dating shopping list or doesn’t have as many similar interests as them.  But surely you can tell from browsing a profile whether you would be compatible with a potential partner based on its content, I hear you ask?  The answer is no, you can’t.  Don’t take my word for it though – as a series of studies spearheaded by relationship psychologist, Dr Paul Eastwick has shown that you might think you’re making sensible decisions about who to meet and who is compatible with you when browsing profiles.  However research proves that you cannot get an accurate sense of romantic compatibility until you’ve met the person face to face. Read the Scientific American article here.  This is the principle that First Dates works on (meeting face to face) and that is why it’s so successful.

It also links very nicely back to the comment Scott made about him not picking Victoria on paper.  Had he turned down Victoria at the paper stage (viewing her profile) then he simply would not have met her, there would be no wedding, no children, no life together and no happy ever after with Victoria.

Our matchmaking service has a 65% success rate for couples dating and creating relationships.  Seven out of ten couples we match per week are now dating with a good number in long term relationships.  We achieve this because we ask our clients to trust us and meet everyone we recommend for a first date.  Those who do meet who we recommend get the most from their membership and very often leave us happy and in love.

Stepping into a first date: what shoes to wear

Are you too Picky